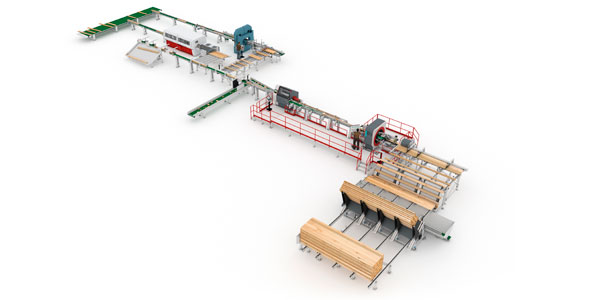 From interactions to repeated transactions: What makes this leading supplier of wooden pallets loyal to System TM?

Maintaining a superior market position as a leading timber packaging company involves staying on top of rapid technological developments in manufacturing. Due to its long purchase history and trust in System TM, Timpack knew exactly who to contact to add new production capacity and implement the latest manufacturing technology.

It is plainly constructed of raw wood and nails. Most people never give it a second glance, but consider for a moment the modest wood pallet. It is so ubiquitous that it is everything but invisible. The wood pallet is one of the workhorses of our global economy and an essential platform for transporting goods from warehouses to store shelves.

At Timpack, the wood pallet is the very foundation of the company’s success. System TM has been there along the way, frequently supplying Timpack with high performance machinery for pallet and bin production. So, what is the key ingredient to Timpack’s continuous loyalty? The answer lies in the high-trust relationship that exists between Timpack and System TM – a relationship based on a shared ability to neutralize the effects of geographic distances.

In 2016, Timpack reached out to System TM and System TM’s Australian dealer, Southern Cross Engineering, to replace its former System TM manual crayon-marking line and expand production capacity. As a result, Timpack invested in an optimizing Opti-Kap 5103 cross cut line that incorporated a MiCROTEC GE301 scanner. Since then, the company has gained tremendous production capacity, economies of scale, and maximum utilization of wood.

What keeps Timpack coming back for more?
Trust leads to successful business transactions which are repeated for many years. In international business, B2B relationships require high commitment, trust and dependability because big things happen across large distances. ‘‘We’ve built a high-trust relationship with Timpack by getting to know Alan Walters (CEO) and Jason Togia (General Manager) on a personal level, aligning products with Timpack’s goals, sharing knowledge, and visiting Timpack on a regular basis’’, says Per Jensen, Area Sales Manager at System TM.

“I’ve been working with Per and System TM for many years and have visited their state of the art factory in Odder, Denmark where I’ve found their products, service and people to be reliable, forward thinking, responsive, great to work with and of a very high standard. We hope to continue this relationship on other projects for years to come and would recommend you talk with System TM for high quality optimizing saws.”

Timpack Industries Ltd.
Providing the dairy, horticulture, meat and manufacturing industries with total pallet and bin solutions since 1984, Timpack is at the cutting edge of timber based packaging. With its head office and main branch located in Hamilton, New Zealand, Timpack employs over 200 staff across seven sites throughout New Zealand. Timpack manufactures standard and custom designed pallets. Thanks to automation, Timpack produces high-quality products that meet strict criteria for hygiene, robustness and load bearing.

Initially, package feeding takes place by means of a tilt hoist. Then, a separator makes sure Radiata Pine workpieces are separated and organized before arriving at the subsequent conveyor. As workpieces move along the conveyor, they enter the MiCROTEC GE301 scanner. Then, scan results are transferred to an optimizing software program which calculates optimal cutting positions and instructs the Opti-Kap 5103 cross-cut saw how to cut workpieces with maximum wood utilization. Eventually, workpieces leave the cross cut line to be sorted to different locations for further processing, such as a moulder and/or a band re-saw.