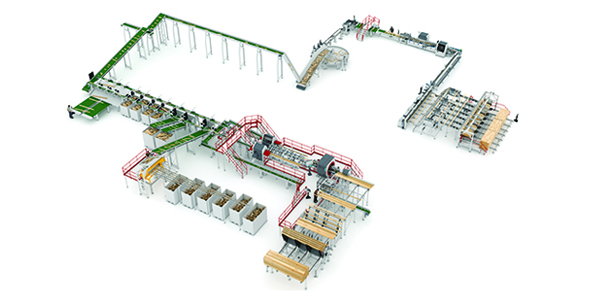 After facing high operating labor and maintenance costs, skilled labor shortage, and inconsistent production, it was time for DANK to act and invest in System TM machinery. Today, DANK has overcome these challenges thanks to an optimizing Opti-Kap 5003 cross-cut line and an Opti-Joint H-200 horizontal finger jointing line.

In Uruguay, it’s not always sunny and beautiful. Rising prices and emigration continue to pose some threats to Uruguayan companies, leaving the country with a shortage of qualified labor. For DANK however, it’s about how you respond to the situation. For the past 5 years, DANK has repeatedly been ­making ­investments in System TM machinery as part of its plan to automate manufacturing ­processes and obviate the need for human ­labor to remain unaffected by Uruguay’s ­labor shortage.

DANK
Uruguayan based DANK was established in 1987. DANK is a subsidiary sawmill of ­FYMNSA (1974), a family-owned plantation of high-quality pine. DANK has 145 employees and processes raw material from FYMNSA’s FSC certified pine plantation.

Optimizing flow and throughput
The Opti-Kap 5003 cross-cut line obviates the need for human labor, helps put an end to soaring labor costs, and eliminates safety hazards at DANK’s plant. As for production performance, the Opti-Kap 5003 cross-cut line provides consistent chopping quality and high-volume production due to its 2 cross-cut saws. “Some of our usual problems were inconsistent cutting patterns and unpredictable production volumes’’, says Gustavo Balerio Jofe, CEO of DANK. Today, DANK manufactures products in less time and at far lower costs, with much steadier production ­volumes and even cutting patterns.

‘‘Our Opti-Kap ­solution has reduced our ­labor costs and ensured excellent, consistent production output. Going from our ­former manual crayon-­marking ­system to this cross-cut solution has generated a lot of savings’’.

A recipe for top-notch production
The Opti-Kap 5003 cross-cut line starts with automatic infeed. Then, workpieces are scanned for defects by a multi-sensor MiCROTEC Goldeneye 302+ scanner and chopped by two optimizing cross-cut saws, Opti-Kap 5003. The Opti-Kap 5003 cross-cut saws have unique circular saw blade strokes and a design that ensures high cut accuracy. Next, re-rip workpieces are marked according to their re-rip orientation and sorted onto a re-rip machine. The other workpieces are sorted according to their qualities, which means they are either sorted into fixed lengths (where manual stacking is possible), sorted into different qualities of finger-jointing components, or transported directly to the Opti-Joint H-200 finger-jointing machine.

A harmonious relationship
DANK is a company with high demands for its production equipment, and System TM is always flexible and responsive to customer demands. ‘‘This creates the perfect ­harmony between DANK and System TM, as the combination of System TM’s flexibility, ­responsiveness, machine implementation and follow-up fits perfectly with DANK’s business philosophy of maintaining high standards’’, says Morten Plejdrup, Area Sales Manager of South America at System TM.
In South America, close business relationships are highly valued. ‘‘DANK appreciates the fact that they can call our CSO or our South American dealer, Linares, anytime any day. They like that our relationship is this close’’, says Morten.