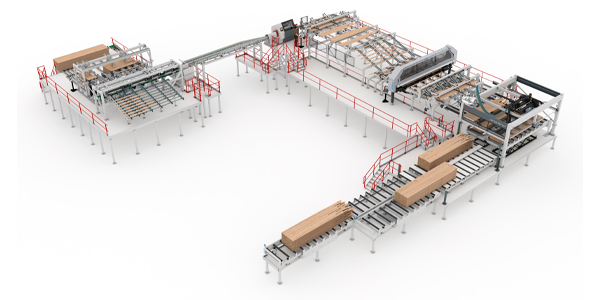 Derome Rises Above Competition Thanks to System TM Line

With Derome’s latest investment in a System TM cross-cut line, the company hopes to efficiently produce prefabricated tongue and groove panels and at the same time stay competitive with substitute products from other industries that offer similar benefits as Derome’s products. Derome’s optimizing Opti-Kap 5103 line is future-proof and offers special features to enable the simultaneous production of two product types.

Securing long-term success
Securing long-term success is about how you make a product better than that of your competitors. Derome Timber manufactures prefabricated tongue and groove panels for fast on-site assembly. Derome’s boards offer many added value benefits compared to substitute products. For instance, they are environmentally friendly and better for indoor climates than plastic, plywood, and synthetic material roofing underlayment. They also make it easier for houses to take in and let out air and absorb and release moisture.

A business in continuous development
The Derome Group is one of Sweden’s largest family-owned wood groups dating back to 1946. Since then, the family-owned business has expanded greatly. Today, the Derome Group has more than 2200 employees and an annual turnover of SEK 8 billion.
One of Derome Group’s divisions, also known as Derome Timber, has four sawmills that produce a wide range of wood products for both the Swedish market and numerous export markets. The new Opti-Kap 5103 cross-cut line is situated at Derome Timber’s sawmill in Veddige, Sweden.

A line with special features
Being a highly knowledgeable company, Derome necessitated the need to explore smart ways to design the Opti-Kap 5103 cross-cut line. Therefore, the line is packed with special features. ‘‘I was impressed with the technical capacity which was present in Derome’s entire organization. Their people are heavily involved with technology and they dove deep into technical details before choosing this System TM solution’’, says Allan Them, Area Sales Manager for Scandinavia at System TM.

Technical description of the line
A vacuum feeding system, Opti-Feed 6000 Vack, de-stacks layers of boards, after which the boards are proportioned one by one through a Finscan cross-scanner (now owned by MiCROTEC). The subsequent data from the scanner determines where the boards go next – either they move down to a system underneath or up to an Opti-Kap 5103 cross-cut saw. Thanks to this special feature, or in other words the flexibility of the distribution process, Derome can produce two types of products simultaneously.
The boards that move down are eventually turned into prefabricated tongue and groove panels. The boards that move up to the Opti-Kap 5103 cross-cut saw are intended for surplus tongue and groove panels which are eventually turned into other products later on. As the boards move up to the Opti-Kap 5103 cross-cut saw, the data from the scanner is used to cut the boards with maximum wood utilization. Then, they exit the Opti-Kap 5103 onto sorting belt conveyors where they are either transported to a Veldum line or to an automated Opti-Stack 6000 stacker after which the boards reach a manual packing station. In fact, the Opti-Stack 6000 stacker is divided into two stackers which makes it possible to either stack short and medium components or merge the two stackers together to stack long components. This is another special feature in this line.

Fulfilling Derome’s special requests
Previously, Derome was unable to obtain high yield from raw wood. Due to the System TM line’s state-of-the-art scanning, optimization, and chopping, Derome now extracts high yield from raw material and uses wood to the fullest.
In accordance with Derome’s request, the vacuum feeding system (Opti-Feed 6000 Vack) is designed to de-stack layers of boards at a higher speed than the Opti-Feed 6000 Vack normally de-stacks. After the scanner, the boards are also sorted out faster than usual since a huge number of boards are processed by the scanner per minute. As a result, Derome now has a high production capacity which helps the company stay competitive.

‘‘System TM comes across as a very professional company. It was a great advantage that the line had been tested prior to delivery, as this significantly sped up the commissioning process.”

– Per Andersson, Development Manager at Derome