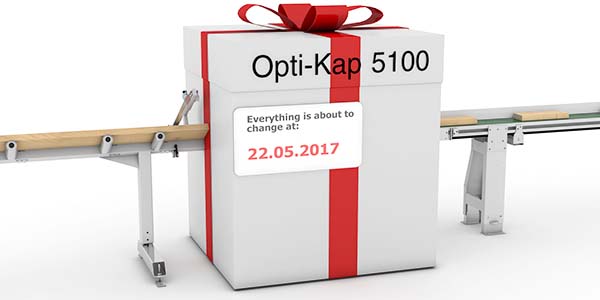 Everything is about to change at Ligna 2017

System TM has always strived to provide the best in all respects. With the development of our new saw series, the Opti-Kap 5100, we are getting even closer to perfection.

Proceeding from Opti-Kap 5000, perhaps the world’s best optimizing crosscut saw ever made, the new optimization cross-cut saw series, Opti-Kap 5100, has been designed in the following manner: more user-friendly in terms of operation and service, stronger in terms of construction and equipped with improved intelligent control software. Due to these improvements, the Opti-Kap 5100 is capable of achieving better performance.

Thanks to new mechanical initiatives and intelligent management software, the intelligence of our saw has been enhanced to ensure minimal downtime and to automatically resolve errors caused by workpiece condition, operator or machine error.

System TM has more than 30 years of experience in the development, production and service of high-speed computer-controlled cross-cut saws of great durability and performance. The Opti-Kap 5100 series are developed based on extensive experience which has been built over the last 30 years, with high emphasis on performance, power and minimum maintenance needs. Ultimately, we seek to provide customers the highest return on their investment.

Formed on the basis of our slogan, optimization of staff and wood resources, as well as Industry 4.0, our software and hardware have been designed to be much more intelligent in terms of resolving errors made by operators, workpiece conditions or the machines. As a result, they automatically resolve these errors before they occur.

In compliance with the above-mentioned, each individual machine and system will be designed to be less dependent on human intervention in the future. As such, they will be able to self-regulate and self-operate automatically in order to achieve maximum line utilization.

Our data collection system, the Opti-View, ensures and collects performance data from each individual machine included in the line. System TM and our customers will be able to collect and analyze crucial data from their line. Consequently, this will allow them to adjust and maintain their line to attain optimal performance. Finally, to ensure flawless line performance, the Opti-View will become a standard integrated option for all new large Opti-Solutions.

In conclusion, System TM will be focusing on the continuous creation of more intelligent machines of minimum operator intervention in order to eliminate the contingency of operator error and avoid operator dependency. Using our intelligent machinery, we will minimize downtime and consequently, utilize the number of available work minutes in the most efficient manner possible.