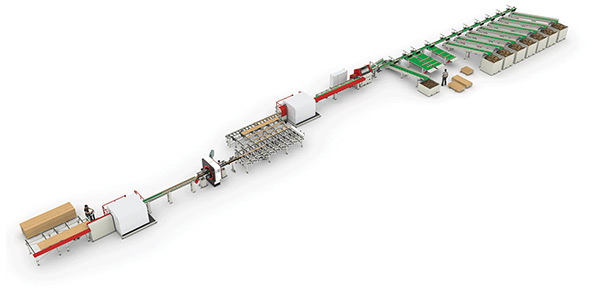 
The South American company Laharrague Chodorge S.A. optimizes their production for moulding and millwork components and combines moulder, scanner and optimizing cross cut saw in the new solution from System TM. This investment has also resulted in the first GOLDENEYE 302 scanner from MiCROTEC on the South American market.

Laharraque Chodorge S.A.
The company is emerged from two existing companies: Establecimiento Maderero Chodorge S.A. and Puerto Laharrague S.A.. The expertise from the old companies can be tracked all the way back to 1968, which makes the new company Laharrague Chordorge S.A. into one of the oldest timber companies operating in the province Misiones of Argentina. Since the merger Laharrague Chodorge has managed to use their competencies to optimize their efficiency, which has resulted in an increased amount of sawn timber per year. The company produces moulding and millwork component in softwood for the International and South American market.

The solution for Laharrague Chodorge
The South American company has invested in a solution including scanning, moulding and cross cutting to combine both quality sorting of sawn timber and optimizing cross cutting of moulded workpieces in to components.

The solution consists of:

GOLDENEYE 302 scanner from MiCROTEC
The GOLDENEYE 302 from MiCROTEC combines high technology and effective capacity for best lumber utilization. The scanning values are based on customer-specific parameters, such as defect definitions, grading, chopping and sorting rules.