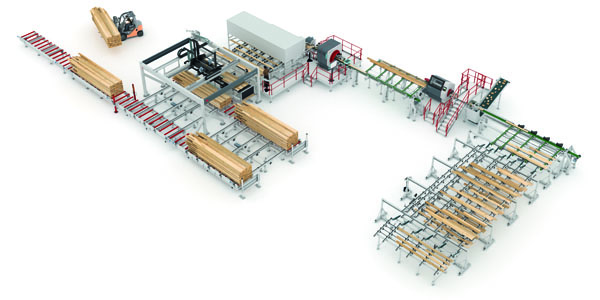 After being urged by safety authority to improve safety conditions, Moelven put its trust in System TM and watched its slow-running, labor-intensive line turn into a fast-paced, optimizing Opti-Kap 5103 cross-cut line. Moelven came out better and stronger with high occupational safety and excellent wood utilization.

In the winter of 2016, Moelven received some unfavorable news that every factory dreads hearing. The Swedish occupational safety authority urged Moelven’s factory in Töreboda to improve the safety of its finger joint machine infeed. Moelven immediately took action and opted for a System TM turnkey solution: an optimizing Opti-Kap 5103 cross-cut line. This line put an end to Moelven’s safety concerns, maximized wood yield and allowed Moelven to save a bundle on labor resources.

The oldest manufacturer of laminated beams
Moelven is a Scandinavian industrial group that produces building materials and systems for the construction industry. Moelven’s factory in the city of Töreboda designs and produces wooden support structures for all intents and purposes. Moelven Töreboda was established in 1919 and is the world’s oldest manufacturer of laminated beams.

Cost leadership with a nice touch
Moelven produces standard glued laminated beams of up to 30 meters, consisting of finger-jointed lengths. Moelven’s beams are laminated based on two strength grades. Beams are produced by gluing various lamella layers on top of each other with strong strength grades on the outside, and less strong strength grades on the inside. This is how beams are produced at minimum cost per unit, while also taking their physical appearance into consideration.

Strict about performance, flexible about approach
Although scaling down production capacity may be one way of designing a less costly line, if there is something System TM never compromises on, it’s performance. The Opti-Kap 5103-line features brand-new main machines that play major roles in terms of performance: a MiCROTEC scanner and an Opti-Feed 6000 Vack automated feeding machine. It also incorporates some of Moelven’s existing minor machine parts, such as pack rollers and chain conveyors.

Everything you need to know about the line
In the first stage, package feeding, workpieces are transported by pack rollers and chain conveyors into an automated vacuum feeding machine, Opti-Feed 6000 Vack. The Opti-Feed 6000 Vack handles two types of board packages, consisting of two lamella strength grades. The Opti-Feed 6000 Vack vacuum feeder takes one lamella layer at a time and places it on the conveyor chains, where stability sticks are removed. Then, workpieces are transported to a deformity scanner, a MiCROTEC Curvescan, that measures bow, twist and crook. Next, a MiCROTEC Goldeneye scanner scans for defects such as knots, splits and cracks. This data is ultimately transferred to an Opti-Kap 5103 cross-cut saw further on in the system, which uses this data to optimize woodcutting and utilize wood to the fullest. After scanning, a moisture meter determines wood moisture contents. Then, workpieces move onto the optimizing cross-cut saw, Opti-Kap 5103, which cuts out defects with special attention to board ends, as they must always be knot-free. Next, scrap wood is disposed, and workpieces are carried to a buffer system that feeds workpieces into Moelven’s finger-jointing machine. Moelven’s beam-builder program instructs the finger-jointing machine how to build and glue lamellas together. It also exchanges information with System TM’s line to make sure the line feeds correct workpieces into the finger-jointing machine.