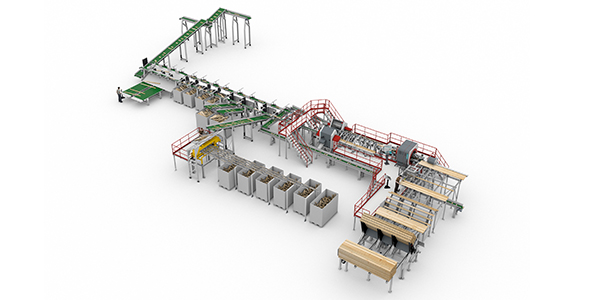 How DANK rose to the occasion

In Uruguay, it’s not always sunny and pleasant. Prices are currently rising as the country develops steadily. This, combined with Uruguay’s culture of emigration, poses some obstacles for Uruguayan companies, as the impact of emigration on the country’s workforce has left Uruguay with a shortage of qualified labor.

But for DANK, it’s about how you respond that matters the most. After dealing with frequent issues such as high labor and maintenance costs, inconsistent production and skilled labor shortage, it was time to take action. Today, DANK is dealing successfully with this situation, as a cross-cut line resolves all of the above issues and has everyone at the company talking.

” This line has significantly reduced our labor costs and ensured excellent, consistent production output. Going from our former manual crayon-marking system to this cross-cut solution has absolutely generated a lot of savings! “ – Gustavo Balerio Jofe, CEO of DANK

A closer look at DANK

Uruguayan based DANK was established in 1987. DANK is a subsidiary sawmill of FYMNSA (1974), a family-owned plantation of high-quality pine. DANK has 145 employees and processes raw material from FYMNSA’s pine plantation. Ultimately, sawn timber is dried, remanufactured and prepared for sale.
The FYMNSA plantation is FSC certified (Forest Stewardship Council) and DANK is 100% FSC-COC certified (Chain of Custody).

With System TM’s Opti-Kap 5003 cross-cut solution, DANK optimizes wood and staff resources, and enjoys the financial gains associated with lean manufacturing. DANK doesn’t only produce much higher production volumes with better production consistency, but also puts an end to soaring labor costs and manufacturing issues which used to slow down production processes. DANK’s need for human effort is brought to a minimum due to the automated technology of the Opti-Kap 5003 line.

To extract maximum value from FYMNSA’s logs and to utilize wood resources to the fullest, DANK produces with as much machine flexibility as possible. Today, DANK’s production is exported and represented by 50% finger-jointing production, 20% clear production (long lengths) and 30% rough-cut, low-grade production.

Time is of the essence at DANK. Gone are the days when DANK used to waste valuable wood resources and time re-grading and re-processing defective workpieces due to incorrect/missing manual marking. Now, DANK gets the job right the first time. Thanks to the MiCROTEC Goldeneye 302 scanner incorporated in the Opti-Kap 5003 line, DANK minimizes the need for re-grading and re-processing of workpieces, as the scanner accurately detects all defects and intelligently places its cuts according to DANK’s required dimensions for finger-jointing, clear boards (long lengths) and low-grade. As a result, some of DANK’s defective wood, which used to be deemed unfit for use back in the day, is currently being utilized and reconstructed either by finger-jointing it into long lengths or by cutting it into smaller items for low-grade use. Essentially, nothing goes to waste and this is what creates significant yield improvement for DANK.

How this benefits DANK’s customers

As opposed to manual crayon-marking and its human error risk, the sharp eye of the Goldeneye 302 scanner doesn’t allow any defective workpieces to slip through. By making full use of wood resources and
re-constructing defective workpieces, DANK generates a much higher number of quality products. In turn, this provides DANK’s customers more value for the same price.

Or subcribe to our newsletter here