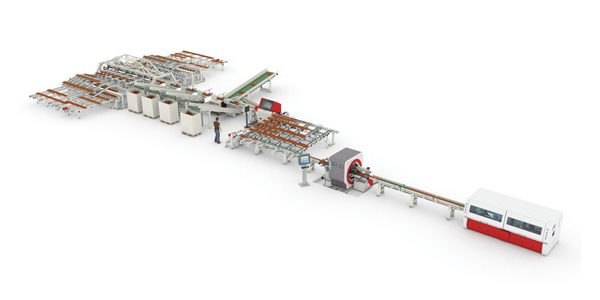 
In February 2015, System TM invited customers to a demonstration in Melbourne, Australia, of our optimizing cross-cut line with Microtec scanning technology. Auswest Timbers participated in the demo event and had their wood tested. The test result were positive, and after visiting System TM and seeing a reference line in Germany, Auswest Timbers decided to invest in System TM equipment.

Ligna 2015 Tech tour
At Ligna 2015, Auswest Timbers visited the System TM stand and after joined tech tour to our facilities in Denmark. During the stay in Europe, our Australian/New Zealand partner, Southern Cross Engineering, also invited them to see a reference line in Germany.

The entire project process went really well, and Auswest Timbers decided that the System TM solution with Microtec’s Multi-Sensor Quality Scanner Goldeneye 302 was the right choice for their production.

The optimizing cross-cut line
Before the installation of the cross-cut line, Auswest Timbers manually crayon marked each workpiece for defects before they were cross-cut. With the installation of the Goldeneye 302 scanner it is now possible to automatically quality grade each workpiece. Furthermore, the optimizing cross-cut saw Opti-Kap 4003 cuts the workpieces according to the scanning and optimizing results. After the cross-cut saw, the workpieces are sorted as waste, according to different qualities for finger jointing components. Due to limited line space, System TM developed a system where workpieces can be transported both left and right, and stacked manually from two positions. This makes it possible to run with four different qualities in each production.

High return on investment
The equipment of System TM and Microtec is very strong and solid, hence capable of handling the hardwood in the production of Auswest Timbers. Installing this solution has resulted in a high wood utilization with a minimum of waste, leading to a fast ROI.

It has been a positive design process for this solution, and System TM is very satisfied with the partnership.