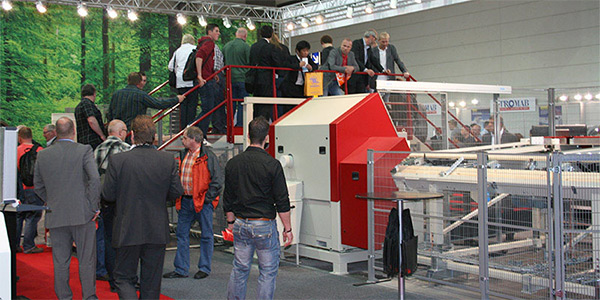 
The Ligna exhibition in Hannover is always very exciting for System TM. The preparation for this size of exhibition is very intensive and the entire staff at System TM is very committed to making this event something spectacular.

High international interest and sales
The international position of Ligna as the world’s foremost tradefair for the forestry and wood industries was also something we at the System TM stand noticed in terms of the high number of international visitors and potential customers. During the week we managed to close several sales and some of them was with customers from very interesting markets such as China and Singapore.

System TM was presenting the following at Ligna 2013:

MiCROTEC GoldenEye 502 scanner: With identification of every detail of the lumber – the intelligent scanner will secure maximum utilization of your wood resources.

Optimizing cross-cut saw model Opti-Kap 5003 Version 2: The unique saw stroke and design of the saw ensures a high quality and accuracy of the cut with an extremely high capacity. System TM is very proud to have been a part of the Ligna in 2013 and we very much look forward to the next Ligna in 2015.