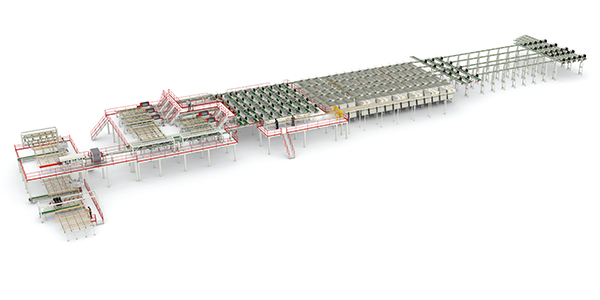 System TM recently designed the world’s presumably largest and most advanced optimizing cross-cut line for Promasa, a Chilean door and moulding manufacturer. Oozing power, this line is packed with everything from a pith eccentricity locator, to a high-tech scanner that processes uneven workpiece widths and lengths, to the ability to feed workpieces into five cross-cut saws all at once. To create such an enormous line, System TM had to make new product developments exclusively for Promasa.

In 2014, Promasa embarked on its journey to find the perfect cross-cut line with strict performance demands in mind. Some of Promasa’s demands included high-capacity production, scanning uneven workpiece lengths and widths, and pith eccentricity localization.

Due to positive word of mouth about System TM’s products and after-sales service from colleagues in Argentina and Brazil, Promasa felt confident about assigning System TM the task to design what eventually became the world’s largest optimizing cross-cut line with five cross-cut saws, the Opti-Kap 5003 model.

Although it was an honor to be given this opportunity, a few challenges were associated with building the world’s presumably largest cross-cut line. As a result, System TM had to make new technological and mechanical developments to increase production capacity more than ever and to maintain a high level of defect detection accuracy at very high speeds.

At Promasa, there are a multitude of benefits with automating manufacturing processes. Ever since the Opti-Kap 5003 line has been installed, Promasa has seen greater control and consistency of product quality, optimized yield and value, and many savings on the cost of labor.

Promasa
Promasa was established in Chile in 1989. Promasa is a Radiata Pine door and moulding manufacturer, supplying raw material to moulding and door producers for the American market. Promasa seeks to expand market dominance in the door and moulding industries using its passion for excellence, responsibility towards the environment, and commitment to workplace safety and employee development.

Never underestimate the power of word of mouth
In these interconnected days, how customers feel about companies and what they tell others about them can influence revenues and profits just as much. While on the lookout for the right supplier, Promasa came across System TM due to good WOM (Word of Mouth) from Argentinian and Brazilian colleagues, who expressed their satisfaction with System TM’s machinery and after-sales service. Eventually, WOM played a pivotal role in Promasa’s decision to invest in the world’s presumably largest cross-cut line, a System TM Opti-Kap 5003 line.

From imagination to creation
While searching for the perfect cross-cut line back in 2014, Promasa did not wish to settle for anything less than a cross-cut line with high-capacity scanning for uneven workpiece widths and lengths, which could process workpieces at 400 meters per minute. A pith locator for eccentric pith positions was also on Promasa’s wish list.

System set out to fulfill Promasa’s wishes by incorporating a MiCROTEC mini CT scanner for pith eccentricity measurement into the Opti-Kap 5003 line. The mini CT scanner is a pith locator with 3 X-ray sources that produces 3D images of eccentric pith positions. As for boosting production capacity to get more done in less time, that’s where the Opti-Kap 5103 line’s five cross-cut saws play a major role.

Keeping our promises – even when it gets hard
Designing and manufacturing the world’s largest cross-cut line may seem like a task that is easily accomplished. Or is it?

Designing the Opti-Kap 5003 line with one scanner for five saws was an exciting yet uneasy task, as it entailed expanding production capacity to a degree never accomplished before by System TM. As a result, this called for exclusive technological developments to create a cross-cut line capable of processing Promasa’s uneven widths and lengths at 400 meters per minute. Although increasing speeds may seem like the obvious solution to boosting production capacity, the secret lies in the ability to increase speeds while maintaining the same defect detection accuracy as regular, less speedy, cross-cut lines. Also, System TM met mechanical challenges by designing the Opti-Kap 5003 line to feed workpieces into all five, optimizing cross-cut saws at high speeds without running out of wood.

Here’s how the largest cross-cut line handles workpieces
Workpieces enter the line from two rip-saws. At first, line operators sort incoming raw wood according to its quality. Next, workpieces are trimmed and bisected by trim saws if needed. Then, workpieces automatically move by means of a lifting wheel and are eventually lifted to the second floor where the cross-cut line is situated. Workpieces are then examined by the MiCROTEC scanning equipment – first, a mini CT scanner that locates eccentric pith positions and defects, followed by a visual scanner that scans for other defects. Upon scanning, workpieces are ready to enter two distribution systems featuring two sweepers. The sweepers brush off workpieces before they enter two cross-cut systems – cross-cut system 1 with three optimizing cross-cut saws and cross-cut system 2 with two optimizing cross-cut saws
(5 in total). Altogether, the cross-cut saws chop up to 750 finger-joint ready components per minute. Cross-cut system 1 and 2 each have 35 sweepers which help sort finger-joint ready components into different qualities, widths and lengths. Finally, a re-rip option is available for workpieces with defects on the sides.

High workflow automation, high savings
The Opti-Kap 5003 line replaced a major part of Promasa’s manual labor with automation. Thanks to this line, Promasa’s cost savings from automation have been realized by producing a higher value product through optimum wood utilization and remanufacturing.